The story of Emilio's positive birth 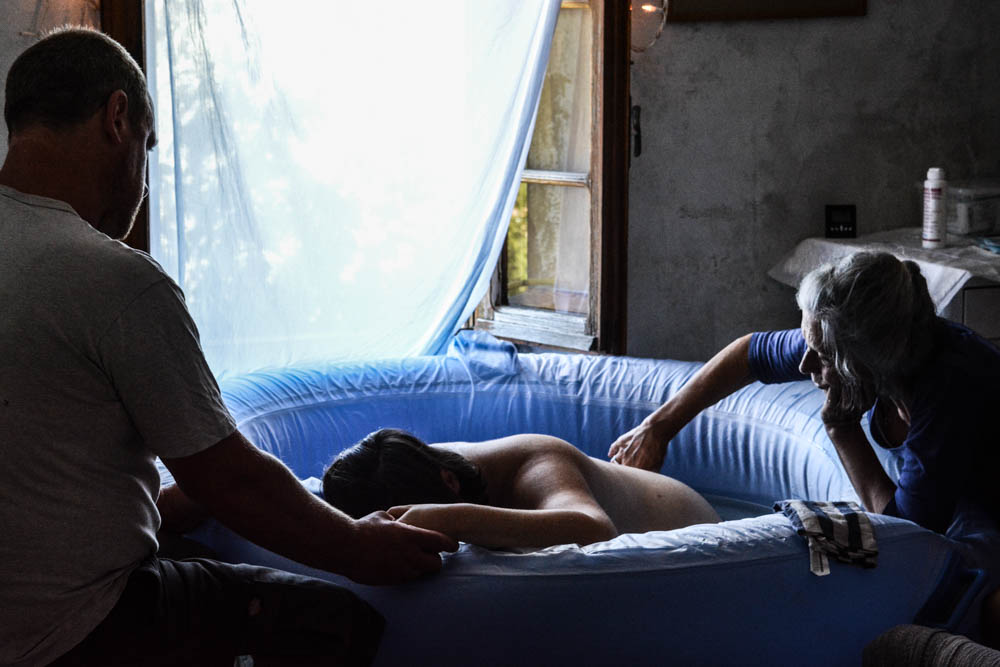 After the traumatic (long labour ending in unnecessary rushed hospital interventions) birth of Giorgio, we were more determined than ever to have a positive birth experience for our second child.  Ideally this meant at home with our lovely midwives Marianna and Giovanna, but we were realistic to know this isn’t always possible so the main things for us were ensuring as ‘natural’ (safe environment, drug and intervention free) birth as possible with positive supportive people around us who would advise and respect our decisions.

We prepared everything for a home birth, with back up of the local volunteer ambulance as standby (we live quite a long way from the nearest hospital), two very experienced midwives and months of preparation with our midwives and using Katharine Graves’ hypnobirthing techniques.

In the end, Emilio and I decided he was ready to be born a little earlier than expected, but we were basically ready.  Initial irregular surges started at about 8 in the morning so we informed our midwives, who started to make their way to us when we informed them the surges were getting stronger a few hours later.  Gavin rushed about getting everything finished – pool inflated, preparing lunch for everyone, warning our neighbours there might be some long hours of babysitting of Giorgio ahead while I pottered about doing what I could between surges.

Our midwives arrived at about 1.30pm, and soon after Katharine Graves (we had invited her to stay in one of our holiday apartments) who was out of the car and came straight up to our room to be our doula!  Soon after I entered into active labour, kneeling on all fours on our bed and mooing like an angry cow in a deep voice (this would continue until birth with all the surges, I had a really sore throat the next day!). 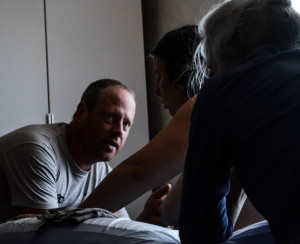 At 3.30pm Marianna asked if she could check dilation and I was about 5-6cm so I got in the pool by the open window and continued to stay on my knees through the surges that became gradually more powerful.  My husband Gavin was right in front of me the whole time, holding on to me, squeezing my wrists as I squeezed his, smiling at me and encouraging me through and after each surge, while Katharine, Marianna, Giovanna and a lovely young midwife Martina (who had asked to come and observe, and also offered to take photos) looked after me as well, fetching drinks, stroking and trickling water down my back and generally telling me how well I was doing.

To me this was one of the most important aspects, at one point I even started saying I was scared and couldn’t do it, partly just to hear from them all that I could and it was going great, it was as if I somehow just needed to hear it specifically in response to my ‘fear’ even though there wasn’t really any fear!  On the other hand though I was able to joke in the breaks, asking if someone else wanted to take over for a while!

I think it was in this period that the hypnobirthing preparation really came into play.  I couldn’t really concentrate on visualisations or specific breathing techniques, but I did notice that I would go to a different place during surges – I remember mentioning once that I was walking through the woods – and while I would become totally present in the room again between (some of) the surges, I would still be split in two, ready to go to the other place again.  When I looked at Gavin at these times it was as if he knew I was somewhere else and could comfort me there, but not follow me there, it was something I had to do myself.  Marianna told me after that my surges seemed quite short, but powerful, and in a way I’m glad – part of me thinks I couldn’t have managed longer ones, as the power/pain balance might have tipped by my losing concentration in favour of the pain!  Who knows.
Around 5.30ish I needed encouragement from Giovanna to really direct my energies down, rather than most of it coming out in the mooing!  Katharine encouraged the opening visualisations, bringing me a sunflower from the garden and Gavin fed off her positive energy, telling me how well I was doing.  By now I really was to ge 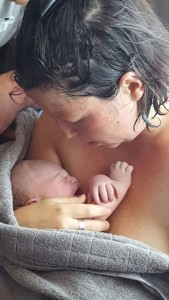 t stuck in, making the physical space bigger (raising one or other leg up) and the mental space too (directly imagining my cervix and vagina widening and the baby coming down).  At the end I kept being afraid the head was coming out ‘backwards’ (it felt as if my anus was going to split!) and also that the baby was slipping back between the short surges (he  might have been as the cord was around the back of his neck so might have been pulling hi a little), but by push 6 of these last intense push surges I felt his head come out (oh, the relief!) – Marianna seemed to say an age later ‘His head is out’ to which I replied ‘I know!’  His body followed very quickly, with both shoulders coming at the same time (unfortunately re-tearing the scars from Giorgio’s birth), Marianna passed him through my legs to Giovanna who unwrapped m backthe cord from his neck and I took him from her arms, this tiny thing with wide open eyes.  I was in shock I think, I didn’t know what to do or say so I just stared at him, only gradually becoming aware of the room and everyone else again and savouring the sense of relief that I had finally done it.

And not to forget the third stage…..by this point the water had cooled a little too much so they all helped me out of the pool, juggling baby and cord and onto the bed where I quickly birthed the placenta (also a massive relief, it felt really icky!), lay back to have some stitches (not nice at all but necessary) while holding out little baby with Gavin next to me comforting and stroking me still.

What I appreciate most about Gavin, about out midwives and Katharine, about the hypnobirthing preparation and about being at home was the confidence they all gave me.  Going through labour, even essentially a pretty quick textbook labour, and birth, was still a massive shock and such a strong experience, but I can now say with pride that I gave birth – it wasn’t something that happened to me but something that my baby and I did together, supported by a whole team of wonderful people both in the room at the time and through out the preceding pregnancy, online, on the phone and in person.